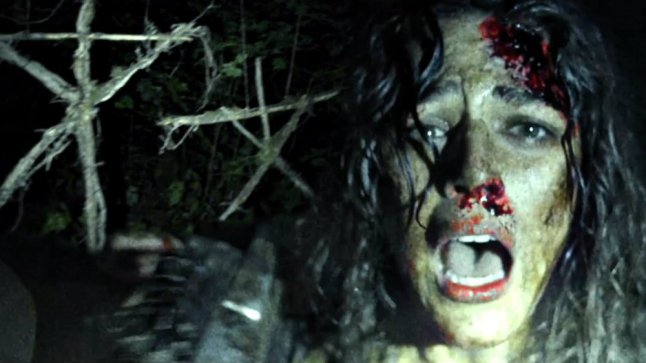 This film follows on from the hugely successful THE BLAIR WITCH PROJECT that hit our screens in 1999 and more or less founded the whole ‘found footage’ genre of films. So, next time you slide a horror film into the old DVD machine, only to be confronted by a bunch of four to six annoyingly good-looking college students wearing night vision goggles and running around like mad things filming nothing we can visibly see, well then, you know who’s to blame, lol.

I must admit I get tired of the genre myself sometimes, especially when a film seems to be mostly shot in the greeny night vision that gives everyone alien eyes. I always defend THE BLAIR WITCH PROJECT, though, whenever people slag it off. I don’t care what its detractors say, it scared the living shite out of me, anyway.

This film here sees Heather Donahue’s brother James going back into the woods with a bunch of his friends, the woods where Heather disappeared twenty years ago, to see if he can find out what happened to his poor missing-presumed-dead sister.

Oh, and of course they’ll be documenting their journey every step of the way with their modern cameras and memory cards and memory sticks, and some eejit’s even come up with the bright idea of letting them bring a drone along as well to take pictures from up over their heads. I would fire that guy if it were up to me, and no, there’s no ‘lol’ this time. I’m deadly serious.

Anyway, d’ye remember Heather? She was the only girl on the original expedition and she was also the one in the much-parodied night vision scene where she was sniffling and snotting and apologising profusely to everyones’ Moms for having gotten everyone on the expedition- herself and two lads- into such a pickle.

I should think so and all, humph. I blame her entirely for what happened to everyone. No real reason but ya gotta blame someone and she’s the only one whose name I remember. Now we can ‘lol,’ lol…!

So, Heather’s brother James brings his three mates Peter, Ashley and Lisa into the super-spooky Black Hills Forest in Maryland for a scout round to see, as we said earlier, if he can find out what happened to Heather twenty years earlier. Can he and his mates succeed where the police failed? Well, I’m sure they’re welcome to try but there’s been a lot of water under the bridge since then.

Let’s quickly get the dross out of the way so we can move onto the good stuff and, yes, there is some good stuff. I didn’t like Talia and Lane, especially Lane, who was very off-putting.

These are the two locals who tag along uninvited with James and his mates because they claim to know the area and they have stories about the real so-called Blair Witch, the Elly Kedwards (Kelly Edwards, anyone?) who died in the area at the hands of the gruesome locals back in the day.

The first morning in camp, they wake up surrounded by the freaky folk-art corn-dolly symbols from the original film. Then there’s the usual mad rushing around, with the students trying to leave the woods only to find that the woods won’t let them leave. Time starts to lose all meaning for the campers once the sun literally stops rising and they’re trapped in a permanent state of night. That bit’s good and scary.

Ashley’s foot injury looks like it’s going to be extremely sinister but then it just ‘peters’ out, if you’ll excuse the pun. Her fate and Peter’s are not scary at all. Much more could have been made of these two situations but they were left to go to waste, sadly.

The film doesn’t really start to kick ass until the house, the house that featured in Heather’s found footage and that the police failed utterly to locate themselves, suddenly hoves into view in the middle of the darkest, rainiest, most frightening night of the campers’ lives…

I might actually leave it there because nearly everything that happens from now on is super-scary and it shouldn’t be spoiled for new viewers. I’ll always give a BLAIR WITCH film, be it a follow-up, a sequel or a re-make, at least one chance because the original premise is so strong. BLAIR WITCH definitely deserves at least one viewing. Y’all can make up your own minds as to whether it’s worthy of a re-watch…!