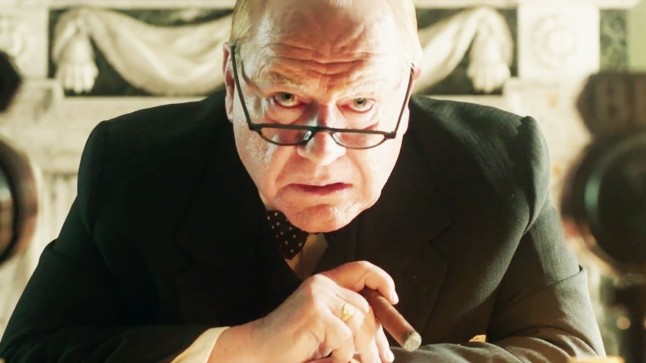 CHURCHILL (2017) and DARKEST HOUR (2017), which I reviewed recently as well, are actually quite similar to each other. They each tell the story of British Prime Minister Winston Churchill as he prepares to face one of the two most troubling and problematic- yet ultimately victorious- events of World War Two.

DARKEST HOUR shows us Winnie, whom some people still regard as the greatest Briton who ever lived, fretting himself half to death over the monumental event that became known as Dunkirk, when thousands of British soldiers were rescued from the French coast by English vessels, many of them civilian crafts, getting them out just before the Germans were able to swoop in and cause a massacre.

Though the whole operation must have been rendered necessary by a mistake or failure on the part of the Allies- why else would so many Allied soldiers have been so nearly turned into sitting ducks for the Nazi forces in that one handy area of France? I’ll probably be reviled for pointing this out but one can’t help wondering why it was ever allowed to occur in the first place!- Dunkirk made heroes out of many hundreds of ordinary courageous British civilians, and rightly so. See, I’ve finished that point on a high note. Call off your (bull?)dogs, lol.

It became known as D-Day or the Normandy Landings and it involved thousands of American and British soldiers, in the biggest land-sea-air operation of the entire war, landing in France with their tanks and guns, all fired up for the liberation of France from the Germans.

OPERATION OVERLORD managed to bring about the very turning point in the war it was hoping to achieve, although the three lads, Winnie, Monty and Ike, were terribly afraid that it mightn’t work. The weather was a crucial factor in whether or not the gambit would succeed.

After much faffing about and discussion of meteorological charts, it was decided to make a run for it, as it were, during a break in the stormy weather and, mercifully, it worked. God and Mother Nature were clearly both on the side of good that on that fateful day, June the 6th, 1944.

Germany, of course, would not capitulate until the 8th of May, 1945, about a week after the suicide of Adolf Hitler, so there was still nearly a full year of the war left to run.

This was bad news for the millions of prisoners-of-war, political prisoners, Jews, Roma gypsies, homosexuals, Jehovah’s Witnesses and so-called ‘enemies of the Reich’ who still languished in concentration camps across Germany and Poland, in appalling conditions and with almost no hope of a return to normal life.

Still, D-Day probably marked the official beginning of the end for Hitler and his short-lived Third Reich. They managed to do an awful lot of damage though, didn’t they, in the twelve short years they were in power? Books are still being written about that period and films like this one have never been more popular. We’ve had about three of them- these two, and DUNKIRK- out in the last year or two. Not bad going for twelve short years…

Anyway, Winnie is openly critical in CHURCHILL of OPERATION OVERLORD. He thinks that the soldiers will be massacred as they land in France. He’s thinking very much of Gallipoli, in the First World War, for the failure of which he himself was blamed. It’s clear that he’s agonised over this failure every day of his life since and he still can see the blood mixing with the foam of the waves and hear the anguished cries of dying men.

I’ve always found the whole Gallipoli thing to be hard to understand but here’s what happened, to the best of my limited knowledge. Winnie was the First Lord Of The Admiralty back then. Hoping to knock Turkey, Germany’s ally, out of the war for good, he and his colleagues arranged for a humongous amphibious Allied Landing- oh, one of those, lol!- on the Gallipoli peninsula, which was part of Turkey.

As far as I can make out, it was a massacre as the Turks were much better prepared for this Landing than the Allies knew of. As well as British and French casualties, so many Australians died during this campaign/battle that the Australians’ commemoration of Gallipoli on the 25th of April, known as ANZAC Day, is the biggest date in the calendar every year.

Winston Churchill resigned from the Admiralty as a result of the Gallipoli disaster and, even though he obviously went on to become the British Prime Minister in later years, he was always understandably sensitive from then on to the notion of ‘amphibious landings’ of huge amounts of Allied soldiers on foreign war-torn shores.

Winnie comes up against Field Marshal Montgomery and General Eisenhower, the actual Supreme Commander of the Allied Expeditionary Forces in Europe who later became the American President, on the subject of the D-Day Landings. He thinks that the whole thing is sheer bloody madness and nothing more than an invitation to a mass slaughter.

Monty and Ike, however, maintain that this Landing has been planned for weeks now, it’s the right thing to do and, furthermore, they’re not going to let an old duffer like Winnie put a spoke in the wheel at this late stage.

Luckily for them, it does turn out to be the right thing to do but it’s a bitter pill for Winnie to have to swallow, especially when these top Army lads make out that he’s an anachronism left over from the First World War, as out-of-date as a piece of period furniture or something.

In CHURCHILL, he and the then King, George the 6th who is the father of the present-day Queen Elizabeth (in 1944, ‘Lillibet’ was just eighteen years old), bemoan together the face that they have to sit quietly at home, like a pair of superannuated geriatrics, waiting to hear the results of OPERATION OVERLORD from other people.

They’re too old, for one thing and, for another, as the Prime Minister and King of England respectively, they owe it to the people of England to keep themselves safe and not to get their heads blown off in a battle somewhere across the Channel as they’ve actually been thinking of doing. I can understand that they both feel useless but with great power comes great responsibility. Tough titty, in other words, lol.

Miranda Richardson plays Clementine Churchill here. She has two modes: she’s either shaking her head fondly at Winnie’s naughtiness and eccentricity and stubborness or being terribly passive-aggressive about the fact that he has hardly any time for her now that he has the troubles of the whole world on his shoulders.

Well, she should probably have expected that when she married him. Statesmen and kings and Prime Ministers have to do the job they signed up for or else they’ll be letting their people down. It’s hard on the wives and families but I’m sure that there are a lot of material compensations to make up for it, and I bet they wouldn’t volunteer to give these up either, lol.

Both films, DARKEST HOUR and CHURCHILL, see Winnie fighting his war with the brilliant, impassioned speeches that are still quoted to this day. I don’t like, however, that both films try to get humour out of an old man’s eccentricities and his physically ageing body in his nightshirt and bare feet.

DARKEST HOUR was particularly guilty of this, showing Winnie’s bare legs as he hopped nekkid out of the bath and ran across the landing in the nip while his young female secretary hovered, mortified.

I’ll be eternally grateful to both films, however, for teaching me the difference between Dunkirk and D-Day, two things I’d mixed up for literally years. In the first scenario, Allied soldiers were rescued from the coast of France and in the second, Allied soldiers were transported to the coast of France in order to carry out the liberation of this country. And I’m sure those snooty French peeps were eternally grateful, lol, and lived happily ever after and never ever looked down their noses on the rest of the world again…!