Daddy: ‘What did you do in school today, honey?’

Cher: ‘Well, I broke in my purple clogs.’

I have a bit of a girl crush on Alicia Silverstone, so I tend to think well of every film she makes. She’s just so watchable, with that fabulous mop of blonde hair and the wonderfully expressive mouth/face. In CLUELESS, she’s also very likeable, and not at all the raging bitch she could so easily be, with her glorious looks and charismatic personality. Well, I said I had a girl crush, lol.

She still looks amazing at forty-five, hardly much different to the girl who got famous in THE CRUSH (1993) with Cary Elwes, and also by starring in a couple of iconic videos for the rock band Aerosmith, alongside lead singer Steve Tyler’s daughter, the no less stunning Liv Tyler.

I’ve always found Liv Tyler, of LORD OF THE RINGS fame, to be rather blank-faced and kind of flat when it comes to performing, though, in contrast to Alicia Silverstone’s infinitely watchable and animated personas. No offence meant, Livvy love…!

Cher is a rich, popular and beautiful student, who attends Bronson Alcott High School in Beverley Hills while living with her father Melvin, a temperamental rich lawyer. Cher’s mum died years ago from a liposuction treatment that went tits-up, if you’ll excuse the pun.

Cher is well liked at school, despite her obvious advantages, which should really make her the butt of terrible jealousy. Her best friend is Dionne, who is dating Murray, who says things like, ‘Woman, lend me some money!’

Cher and Dionne live for fashion, and for going to the mall and shopping till they drop, to the point where Cher’s socially conscious ex-stepbrother Josh (Paul Rudd) teases her about it. He says Cher is shallow and superficial and only cares about clothes and what she looks like on the outside, and this really rankles with Cher.

She wants to feel like there’s more to her than just being a clothes horse, and anyway, she’s given away tons of expensive Italian clothes to their European maid, Lucy, so what is Josh even talking about, anyway, the sap?

A matchmaking exercise on Cher’s part to bring together two rather goofy teachers, Mr. Hall (played by Wallace Shawn, who was Vizzini in THE PRINCESS BRIDE) and Ms. Geist, goes extremely well and Cher is pleased with the nice happy feelings it gives her, even though she only did it in the first place out of self-interest, namely, in order to get one of her poor grades ‘re-negotiated.’

Still, that nice, do-good-for-others feeling sticks with her and, when an utterly ‘clueless’ new girl joins the school- Tai Frasier, played by the late Brittany Murphy- Cher decides that it would be an act of charity on her part to take the gammy ugly duckling under her wing and turn her into a swan. Or a clone of herself and Dionne and the other cool girls at Bronson Alcott High School, more like.

The project has mixed results. Cher goes on to fancy a guy who turns out to be gay, then the guy she has earmarked for Tai only has eyes for her, Cher. Cher fails her driving test and, in an unrelated incident, gets mugged at knife-point, while she’s wearing an Alaia dress, if you can believe her bad luck and the terrible timing. To be mugged when you’re wearing Alaia? Unthinkable…

Then she finally realises that the man of her own dreams has been right in front of her all along, only now, someone else has expressed an interest in snagging this particular guy’s attention… the newly popular and fabulised Tai Frasier, who owes both her newfound popularity and her equally newborn fabulousness to Cher. Oh, the delicious irony of it all! Who will win the love of this guy? Cher… or her creation, Tai…?

There’s not much else to say about the movie, except that it was loosely based on Jane Austen’s light comedy EMMA, and several of the characters in CLUELESS correspond with characters in the novel.

Alicia Silverstone looks incredible through the film and is a great little comic actress too. I love her in straight or even nasty roles, for example, she played a very dangerous liar in THE CRUSH, but she has a gift for comedy too, and a delightfully expressive and mobile mouth and face to help her with that. Talk about blessed.

If you want to join the Alicia Silverstone Fan Club, just bung me a few quid here at my home address and I’ll see gets it, honest I will. We’re actually dead good mates on social media, me and her. At least, I think it’s her, could be one of those fan accounts, but anyway, watch the film if you haven’t already seen it.

It’s a good laugh, very of its time- the baggy pants, skateboarding ‘Nineties- and you might even pick up a few fashion tips, lol. Or find out how to get your teacher to change a grade you’re not happy with. I mean, you don’t want to be clueless, do you…?

Believe In This — Fourteen Lines

BOOKS I’M THINKING OF WRITING IN THE FUTURE:

THE WOMAN WHO WAS THERE ONE MINUTE AND GONE THE NEXT.

THE WOMAN’S DAUGHTER, WHO WAS ALSO SOMEONE’S SISTER.

THE WOMAN AND THE GIRL ON THE TRAIN MEET THE WOMAN WHO WAS THERE ONE MINUTE AND GONE THE NEXT.

YOU TOO CAN BE A SERIAL KILLER.

YOU TOO CAN BE AN ALCOHOLIC SERIAL KILLER.

THE DAUGHTER OF THE WOMAN IN THE WINDOW WHO USED TO BE THE GIRL ON THE TRAIN BUT IS NOW GONE.

THE WOMAN WHO LIVED IN THE HOUSE WITH THE WINDOWS.

THE WOMAN WHO LIVED IN THE HOUSE WITH THE WINDOWS BUT NO DOOR.

THE ALCOHOLIC WOMAN WITH THE DAUGHTER IN THE HOUSE.

THE ALCOHOLIC WOMAN WITH THE SERIAL KILLER DAUGHTER WHO WAS ALSO A WOMAN BUT NOT AN ALCOHOLIC ONE.

YOU TOO CAN LIVE IN A HOUSE WITH WINDOWS.

Let me know if you can come up with any more…

‘Good morning, this is the Mist speaking, how may I help you today?’

‘Certainly, Ms. Harris. May I ask if you’ve lived a good life and tried to help others wherever you could?’

‘Very good. Have you ever caused harm to anyone through your writings?’

‘Not that I know of, your Eminence.’

‘Only bad boys and chocolate, if it please your Honour.’

‘Excellent. I’ll schedule you in to be battered to death by giant rubber penises and drowned in a hail of miniature Snickers Bars.’

‘Could I have it the other way around, please, your Grace? Miniature rubber penises and giant Snickers Bars?’

‘You’ll have to pay extra.’

‘That’s okay, I don’t mind. Can I keep any leftover bars?’

A sigh. ‘If you must, though most people don’t. It’s not like you’ll be alive to enjoy them.Can I interest you in a theme tune while you die? Thus Spoke Zarathustra, perhaps, or the music from the ROCKY movies?’

‘Nah, I’m good, thanks, your Highness. Just the standard death is all. ‘Bye then.’

‘Good day, thank you for calling the Mist, your one-stop-shop for all Apocalyptic deaths.’ 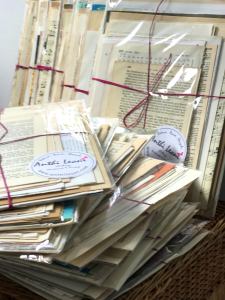 I’ve been reading my dearest friend’s journals. Spiral-bound notebooks, cloth-covered hardbacks, loose-leaf paper in three-ring binders. Sorting out teenage angst and adult story notes, false starts and full pages. Some of the words are casual, some inspiring, some sad.

I’m also digging through her computer. Looking at old story outlines and half-drafts of essays. Working on breaking into her phone.

My friend wasn’t especially organized, but two other close friends and I found what we could after her death, tried to piece together what was worth keeping, what would be a beautiful memory and what was garbage. It was good for the three of us to read her old journals. We threw away the teenage angst and kept some of her adult musings. We pulled some of her unfinished writing from her old laptop and put it in a Dropbox so we could all…