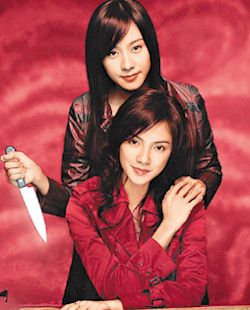 ‘Crawls under the skin and stays there.’

This is kind of an odd one. I really liked and enjoyed it but that’s not to say that there aren’t loopholes in it or places where the plot, frankly, verged on the ever-so-slightly nonsensical. It’s the story of Ching, a beautiful, privileged rich girl whom we first see getting pissed at a friend’s wedding. Fair enough, lol. We’ve all been there…

Ching, however, gets spectacularly pissed and goes for a wander by herself through the hotel where the wedding’s being held. She discovers two things. A strange woman in a coat and high heels walking in the hotel’s deserted upper corridors, and a naked, nearly dead woman who’s just woken up in a bath of ice. With one kidney missing…

Then the fun really starts. The strange woman in the coat and high heels turns out to be Ling, whom it is revealed has been sleeping with Ching’s boyfriend, a good-looking doctor fellow called Wai. Ling is as pretty as Ching though sort of sturdier where Ching is very obviously delicate and too thin, for reasons we’ll discover later.

Ling is as poor as Ching is rich and her mother is a comatose invalid in the hospital, the only person in the film who could be said to be in an actual ‘koma.’ At first accused of complicity in the kidney murders, Ling is quickly declared by the police to be cleared of any involvement. But she did sleep with Wai and even borrow money from him for her mother’s care, so it looks like poor Ching has been taken for a right mug.

Ching also can’t rid herself of the niggling feeling that Ling is evil and intends her real physical harm, aside from merely bonking Ching’s boyfriend and getting money out of him that should be spent on gifts for Ching, by rights, and on his future with Ching. Ching has an horrific dream in which she sees Ling coming for her at night with a scalpel. A scalpel for harvesting a nice, fat juicy kidney…

The kidneys bit reminds me of the time in THE SIMPSONS that Grandpa Simpson needed a new kidney because Homer wouldn’t let him stop for a whizz on the long journey home from the Wild West village, the one with all the prostitutes, lol. ‘Hello, sweet cheeks!’

Homer is eventually talked into giving Grandpa one of his own kidneys but then he gets scared and runs away, finding himself on the Ship of Lost Souls with a motley crew of extremely strange people. But not before togging himself out in some sharp nautical threads purchased from an emporium for sea-faring men: ‘I’m fleeing in shame and I’d like to look my best…!’

Anyway, in the most ridiculous and unbelievable scene in the whole film, Ching is saved from the evil kidney-harvester by none other than Ling, a tiny slip of a girl not much bigger than Ching herself. You’ll have to suspend disbelief for this bit…!

Ching is eternally grateful to Ling, but Ling’s savage jealousy of Ching’s wealth and beauty- and let’s not forget that Ching also has Wai, he’s a dubious prize but both women seem to love him- won’t allow her to be properly friends with Ching. It seems like Ling the Friend is even deadlier and more malicious than Ling the Enemy, so either way, Ching is screwed. Isn’t she…?

As I said, this is a really entertaining Asian horror film, if you don’t mind a few mad plot twists. Probably the scariest thing about it is the very real kidney-and-other organs harvesting business it brings to the forefront of our minds.

Imagine, for a paltry few grand, someone could try to steal your kidney or, even worse, mine. Okay, fine. What can’t be cured must be endured. Just let me run a few gallons of wine through there first…