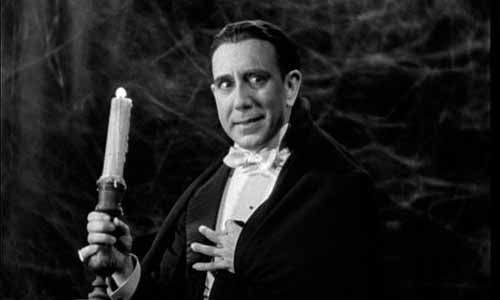 THE SPANISH VERSION OF DRACULA. (1931) BASED ON THE BOOK BY BRAM STOKER. DIRECTED BY GEORGE MELFORD. PRODUCED BY CARL LAEMMLE JUNIOR AND PAUL KOHNER. DISTRIBUTED BY UNIVERSAL PICTURES.

‘He cut open a vein in his arm and forced me to drink from it.’

Sometimes when I watch this film I almost fancy that I prefer it to the Bela Lugosi version, and the Bela Lugosi version is one of my all-time Top Three favourite film versions of the story ever. (It keeps company with Hammer’s 1958 DRACULA starring Christopher Lee, and Werner Herzog’s NOSFERATU THE VAMPYRE from 1979. It’s in very good company, I hope you’ll agree.)

Carlos Villarias, the Spanish El Conde Dracula, seems at first glance almost too smiley and goofy-looking to play the most evil villain in cinema history, but he soon proves himself more than capable of the level of menace required to play such a deliciously pernicious character.

It’s true that he lacks the handsome sophistication of Bela Lugosi and Bela’s Eastern European air of mystery, but he makes a damned good Dracula just the same. I would even say that his performance is the equal of Bela’s, just slightly different obviously as he’s a different person/actor and hails from a different country, a warmer country where the people are reputedly of a more passionate nature than some other of their European counterparts.

The story moves along the same lines as the English language version, with Renfield the estate agent’s clerk travelling to Dracula’s Castle in the mountains in Transylvania against the advice of the locals, who themselves wouldn’t go near the place if you paid them.

He does manage, however, to get a carriage-driver to get him to the infamous Borgo Pass at midnight, where Dracula’s carriage awaits and conveys Renfield to the castle. He finds Count Dracula- El Conde Dracula- a little eccentric but charming and cordial, even if his castle is ramshackle and creepy and belongs to the Dark Ages.

Renfield has, as requested, brought the Count the deeds to Carfax Abbey, Dracula’s intended new home in England. Dracula informs him that they’ll be leaving for England by ship on the morrow, along with Dracula’s ‘three boxes,’ the only luggage the strange Count intends to carry with him.

If he was bringing his three wives, of course, the level of luggage might be an entirely different story. You know women, lol. There’d be hat-boxes and cosmetic boxes and jewellery boxes and boxes of knick-knacks and rails of dresses in plastic safety coverings and the whole shebang. That ship would have sunk like the Titanic.

By the time the ship docks in England, Renfield’s mind is all but destroyed by Dracula’s special ‘kiss’ and he’s clapped straightaway into Dr. Seward’s Sanatarium for the mentally ill. The security there, mind you, is every bit as lax as in the English version of the film and he’s allowed to wander the house and grounds as he pleases, pursued half-heartedly by Martin his minder.

He even ventures into the private quarters of the wealthy Dr. Seward and his family, which consists of just himself and his beautiful daughter Eva. Renfield is now all about the catching and devouring of flies and other small creatures with blood in them- ‘Blood is life!’- and getting excited about the proximity of his ‘Master,’ whom he both adores and fears.

Dracula, meanwhile, has contrived an introduction at the theatre to his neighbours Dr. Seward and Eva, and also Eva’s best friend Lucia Weston and Eva’s fiancé Juan Harker. All four of them are impressed by the Count’s courtesy and good manners.

Before long, Lucia, who’s fascinated by the enigmatic foreign Count and his mysterious remarks on the subject of death, has succumbed utterly to the Count’s blood-sucking ways and become a vampire too, one of Dracula’s terrible ‘cult of the un-Dead…’

Now the ravishing Eva is starting to feel unwell also and eminent physician Dr. Van Helsing is extremely quick to diagnose ‘vampirism.’ His suspicions are confirmed when the suave Count Dracula pays a social visit to the Sewards and Dr. Van Helsing is able to observe that the Count casts no reflection in a mirror. This, of course, is one of the sure signs that someone is a vampire.

That, and a terrible fear of garlic and wolfbane, the two plants guaranteed to keep the vampires away, and also of all or any religious iconography, especially crosses. If you don’t have a cross handy, don’t worry your head about it.

You can always fashion one out of two sticks, or two pokers, or two matches, or even two of your own fingers. It’s only the merest suggestion of the cross that’s needed, according to some Hammer films, lol. Even the shadow of a cross will do at a pinch. (See the finale of BRIDES OF DRACULA…!)

Dracula is pissed off by Van Helsing and tries to bring the doctor’s mind under his control but Van Helsing only just manages to hold his own. It’s down to the good doctor, then, and Juan Harker, Eva’s distraught fiancé, to try to save Eva’s immortal soul from Count Dracula.

Eva is his real object. Lucia was just the starter, the aperitif, the warm-up act. It’s Eva he wants to be his wife, his companion, down through all the long, cold millenia to come. Count Dracula’s intended monstrous act of selfishness will cost Eva her life with her boyfriend and father, and in the end her soul too.

The sets and costumes are gorgeous, and the final scenes, set in the eerie dungeons of Carfax Abbey, are as thrilling as in the English language version. The final scenes are longer here, however, and the ending isn’t as sudden as in the Bela version.

There’s even a nice extra touch in the Spanish film in that Dr. Van Helsing keeps a promise he made to Renfield to free that poor old fella’s soul from Dracula’s rancid grasp from all eternity.

The Spanish film is every bit as atmospheric and fog-wreathed as the Bela Lugosi version and, because it’s a good thirty or so minutes longer, you get a bit extra into the bargain. By the end of it, you don’t even query why everyone in England is speaking such fluent Spanish, lol. And Spanish is such a lovely, musical mellifluous language as well, and some of their words sound very similar to our own, you’ll have great fun figuring out which ones I mean.

Lupita Tovar is wonderful as Eva Seward, and in fact she only died recently, having lived to be well over the hundred-year mark, a remarkable feat in itself. I was delighted to find that she was still alive when I first discovered the existence of ‘The Spanish Version Of Dracula’ a couple of years ago, and then gutted when she died not long after in 2016. Still, fancy living to such a ripe old age! Maybe Dr. Van Helsing didn’t manage to purge all of Dracula’s black magic from her veins after all…