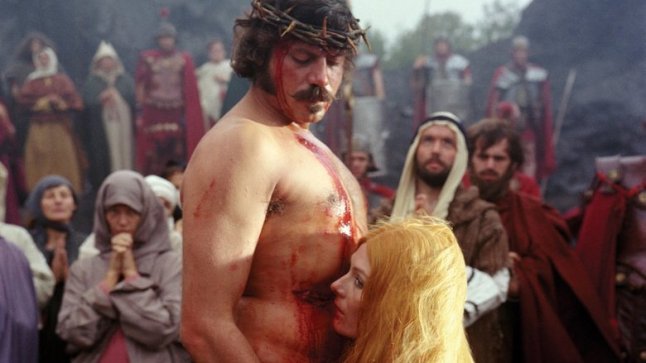 This is such an incredibly intense film that I generally find I’m holding my breath practically the whole way through it, even though such a feat probably isn’t medically possible. It’s like an assault on the senses, with the fantastic period costumes, the disconcerting (excuse the pun) musical score and the way that, just when you think director Ken Russell surely can’t go any further, he then goes and does exactly that.

The story is set in France in the seventeenth century, and it’s based on actual events, which would kind of blow your mind to think about it. It features Oliver Reed in one of his finest roles. He plays Father Urbain Grandier, chief cleric in the heavily walled town of Loudun. He’s a rogue of a priest who unwittingly becomes the centre of one of the biggest witchcraft cases France has ever known.

He’s a womanising lecher of a priest, who has sex with and even impregnates his prettier female parishioners, then he abdicates all responsibility towards them. ‘And so it ends.’ Then he meets the rather plain, ordinary Madeleine, whose mother has just died horribly from the plague that runs rife through France, and he decides he’s in love, real pure love, for the first time in his whole decadent, dissolute life.

If he were just an ordinary womanising priest, I don’t suppose it would have become much of an issue in seventeenth century France. But Grandier was somewhat of a controversial figure politically as well, even though religion and politics supposedly don’t mix very well. Here’s the deal as I’ve interpreted it.

Cardinal Richelieu at the time wanted to knock down the heavy fortifications of Loudun, and thereby put a stop to its system of independent government and the possibility of a Protestant uprising.

He wanted Loudun and other similarly-governed places to stop ruling themselves independently of the monarchy, and he felt that knocking down their fortifications and leaving them defenseless would accomplish this.

Father Grandier, however, refused to allow this to happen by getting the townspeople to stand firm against any such notion. He maintained that, in Loudun, Catholics and Protestants lived harmoniously side by side, without any pesky uprisings at all, and that they needed their fortifications to protect them from marauders. Moreover, the King himself had said that Loudun could keep her walls. So there, lol.

Therefore, Grandier was a big thorn in the side both of Cardinal Richelieu, and also of Baron de Laubardemont, the official he’s sent to Loudun to knock down the walls. They feel powerless to move against Grandier, who’s so popular in the town. What they need is to get rid of him, but how? Then into their laps lands the gift of a lifetime… a tailor-made excuse to rid themselves of the troublesome priest…

The lead female character, chillingly played by Vanessa Redgrave, is Sister Jeanne of the Angels, head nun of the local convent. Poor Sister Jeanne. Her head is permanently to one side because of a dreadful hump on her back. She constantly shuffles about on her knees in the narrow, claustrophobic confines of the convent and this has the effect of making her personality seem as stunted, deformed and twisted as her physical person. I see her as a figure deserving of pity, yes, but a little creepy too.

Underneath the habit (and the hump), Sister Jeanne is a normal woman with normal, human lusts and sexual appetites. Sometimes these will out, even if you try your hardest to repress them. She has a huge crush on Father Grandier, whom she’s never seen, but the legend of the sexually dynamic and charismatic priest that precedes him wherever he goes is enough for her to hang her hopes on.

A perceived slight from the genuinely unwitting Father Grandier leads the horribly frustrated Sister Jeanne to accuse Grandier of a terrible crime. In comes the church’s leading exorcist, the handsome blonde could-easily-have-been-a-rock-star Father Barre, to get to the truth (let’s not say ‘the bottom,’ please!) of the shocking matter…

Father Mignon cuts a frightening figure all in black with his pudding bowl haircut, Baron de Laubardemont is in his element, strutting about the place shouting, and King Louis XIII is shown to be a disgustingly decadent and trivial character, with no more real feeling for his subjects than for one of the grapes peeled for him by his lackeys.

Underpinning it all is the magnificent performance of Oliver Reed as the poor tortured Father Grandier, who once played fast and loose with the feelings of all women, but who now believes he really, truly loves a woman, which love has brought him closer to God and shown him the meaning of love and life for the first time in his thirty-something years.

What he undergoes in the name of ‘Christ,’ no man deserves to go through. This film will stay in your mind for a long time after you watch it. And rightly so, because it’s surely Ken Russell’s and one of Britain’s finest. 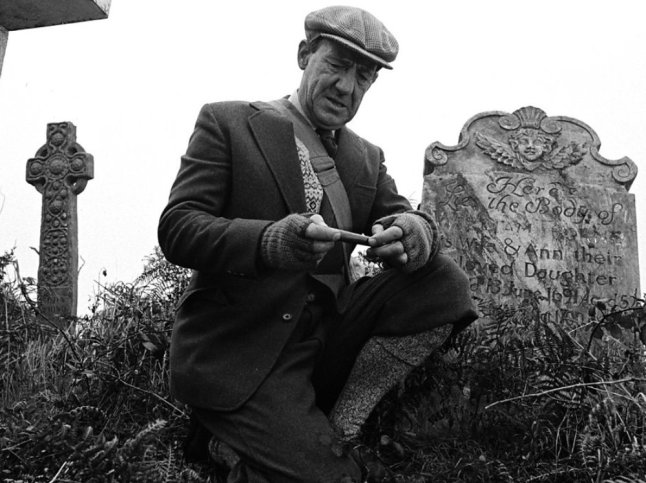 ‘Let us, then, be introduced to the actors in a placid way; let us see them going about their ordinary business, undisturbed by forebodings, pleased with their surroundings; and into this calm environment, let the ominous thing put out its head, unobtrusively at first, and then more insistently, until it holds the stage.’

The 1968 version of Whistle And I’ll Come To You is probably my favourite of all the M.R. James ghost story adaptations by the BBC. Shakespearean actor Michael Hordern is superb as the doddery Professor Parkins, the Cambridge don positively steeped in dusty academia who comes to stay at an East Anglian guest-house for a holiday, during the early years of the nineteenth century. This sensible fellow doesn’t believe in ghosts, nor does he believe that ‘there are more things in heaven and earth than are dreamt of in your philosophy.’

He goes for long bracing walks over the empty heaths and deserted beaches, with his little packed lunch in his knapsack. He doesn’t at all mind his own company, as it’s what he’s most used to.

One wonders what would happen if an actual human female crossed his path; Cambridge dons positively steeped in dusty academia aren’t generally required to interact with too many of these, beyond the woman who ‘does’ for them and brings the meals…!

While on one of his solitary jaunts, clad in tweedy knickerbockers and cap and carrying a stout walking stick, he discovers a filthy old bronze whistle with the following words engraved on it: Qui Est Iste Qui Venit? or Who Is This Who Is Coming?

You’d think that a scholar such as himself, who presumably would have had the old Latin drummed into him in school as a lad, would hesitate to blow on such a spooky artefact of uncertain provenance but, oh no, as soon as he’s given it a bit of an old rub with a clean hanky, he toots on it with gusto. From that moment on, like the poor amateur archaeologist in James’s other superb story, A Warning To The Curious, he’s never alone any more…

It’s a genuinely frightening story. We know that Parkins has brought something sinister back with him from his excursion to the lonely beaches. Are the dreadful things he sees and experiences afterwards real supernatural phenomena, or merely the signs of a mind closed to everything but narrow academic principles disintegrating under the weight of something he’s witnessed but can’t understand? Either way, this piece of vintage television puts the heart crossways in me anew every time I watch it.

Hammer actor George Woodbridge has a wonderful cameo here as the hotel proprietor, who’s even mumblier and more incoherent than old Parkins himself. It’s a joy to watch. I love Ambrose Coghill too, as Parkins’s fellow guest, the Colonel, who engages in intellectual conversations with the Professor over the breakfast kippers. (What is it with the English and their kippers, lol…?)

The 2010 version of Whistle And I’ll Come To You takes a different approach to the story. John The Elephant Man Hurt plays James Parkin, who comes to the deserted seaside guest-house because he and his wife, whom he’s just had to leave in a nursing-home, used to go there in their youth. He has a notion that he wants to re-visit some of their ‘old haunts,’ never knowing how prophetic the phrase will turn out to be.

His wife, Alice, played by Gemma Bridget Jones’s Diary Jones, has dementia. He feels terribly guilty about parking her in the nursing-home, but he also doesn’t feel like he has much choice at this point. Her ruined mind now occupies ‘a body that has outlasted the personality, more horrifying than any spook or ghoul.’

The rows of silent women sitting in identical night-dresses and slippers in the nursing-home are indeed like something out of a nightmare. Lesley Sharp as the nursing-home manager plays her role very strangely too, with a sort of robotic Stepford wife-type voice that churns out comforting words and stock phrases meant to console, but they’re spoken so softly and mechanically that we can’t quite believe she’s real. It’s a bit of a red herring here, us thinking that the nursing-home manager is evil, but in another film, perhaps, her sinister tones might mean something quite different…

I love the empty boarding-house where Parkin goes to stay, and Sophie Thompson as Carol, the harassed single mum proprietress who presumably depends on the guest-house for her and her children’s livelihood.

Parkin is a bit of a complainer, saying that the scratching and rattling he hears in his room must be a rat, and making out that another guest was trying to break into his room, when Carol is equally adamant that he, Parkin, is currently the only guest in the hotel…

It’s pretty clear in this film that Parkin’s overwhelming guilt and sorrow about his wife is manifesting itself as supernatural apparitions. He does actually find an ancient artefact on the beach, however (this time it’s a ring instead of a whistle, perhaps suggesting the joining of two people for life in holy matrimony), and, from the moment he finds it and brings it away with him, the hauntings begin, just as they do with our friend Parkins in the 1968 version.

The horror is more visible than suggested in the more modern version. Some may argue that this harms the film, but I still was pretty scared watching this one, especially when we discover that John Hurt has unwittingly spent a night alone in a completely empty hotel, empty even of the proprietress. The sheeted outline on the beach may at first appear as a sort of comic figure, but I still wouldn’t want to have one of those things following me down an otherwise empty beach, would you…?

The 1968 version of the story is undoubtedly the superior one (less is more, some people think: sometimes what the imagination can conjure up is more horrific than anything the screen can put in front of us), but the 2010 one has its merits too. It’s an interesting take on James’s original story, and another suitably fitting tribute to the great writer, who famously read some of his creepiest stories aloud in his college rooms as a Christmas present to his peers. Here’s what one of them said about these sessions:

‘Monty (James) disappeared into his bedroom. We sat and waited in the candlelight. Perhaps someone played a few bars on the piano, and desisted, for good reason… Monty emerged from the bedroom, manuscript in hand, at last, and blew out all the candles but one, by which he seated himself. He then began to read, with more confidence than anyone else could have mustered, his well-nigh illegible script in the dim light…’