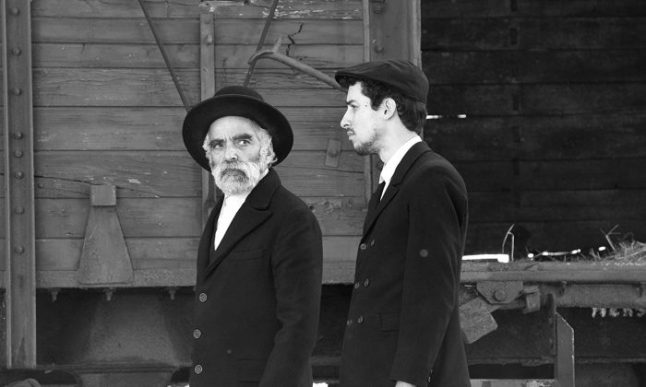 1945. (2017) DIRECTED BY FERENC TOROK. ADAPTED FROM THE SHORT STORY ‘THE HOMECOMING’ BY CO-SCREENWRITER GABOR T. SZANTO.

I saw this one in the cinema today and I loved, loved, loved it. Those of you who know me well know that I love a good black-and-white subtitled Czech or Hungarian movie from any era, modern or vintage, and if it’s a good miserable watch as well, so much the better, lol.

Now that probably makes me sound like I revel in other peoples’ misery and wallow in it the way a piggy-wig rolls in muck but I can assure you that that’s not the case. I just can’t seem to get to grips with comedy. I genuinely prefer to have my heart-strings tugged than my funny-bone tickled.

There’s not much to laugh at here but this is the best new film I’ve seen all year, seeing as THE MEG and JURASSIC WORLD 2: FALLEN KINGDOM weren’t as brilliant as I was expecting them to be…! Ah well. Often, when you watch something for the second time you actually like it better so we’ll see what happens with these two summer blockbusters in the future.

1945 is the story of one day in the life of a small rural village in Soviet-occupied Hungary, namely the twelfth of August, 1945. The war’s been over for several months and Hitler’s been dead since the end of April, unless you’re one of the people who think he survived the bunker and the Fall Of Berlin and went off to live happily in Antarctica till he was an old man…!

The years following the end of the war must have been hugely disruptive and sort of transitional as well, as half of Europe seemed to be on the move. There were millions of displaced persons wandering around the place, as soldiers, partisans, prisoners-of-war and inmates of concentration camps were all trying to get home to their own countries, never mind their own homes.

I remember the writer Primo Levi, an Italian Jew who was sent to Auschwitz by the Nazi regime, saying in his co-joined books IF THIS IS A MAN and THE TRUCE that it took him about a full year to get back to his home in Italy from Auschwitz on foot, while having many adventures and meeting many extraordinary people en route.

If I remember correctly as well, he was one of the lucky ones who arrived home to find some semblance of a house and family still remaining. It was sadly very different for many other Jewish people, who arrived home to find complete strangers living in their houses and running their businesses. I don’t know how many Jews managed to grab back their own land and/or property but I do know that many never did.

In 1945, the town clerk, a fat bald cigar-chomping busy man who’s seemingly the tiny town’s most prominent citizen, is preparing for the wedding later that day of his son.

He’s- Pops, that is- rushing around playing the big ‘I am’ with the local peasants, accepting drinks and distributing largesse and congenial greetings to everyone he meets. He’s the town bigwig and this wedding is presumably going to be the best he can afford for his boy.

Pops’s wife is depressed and deeply unhappy with the upcoming nuptials. She thinks the bride-to-be, Roszi, is a gold-digger who just wants to get her sweaty mitts on the son’s shiny new drugstore, of which she’ll become the proprietress after today.

Well, I don’t know if that bit’s true or not but I can tell you that she’s right to be suspicious of Roszi because Roszi, excuse my French, is a dirty trollop who’s having a sexual affair with the town’s hottest guy, Jancsi. Well. The dirty strumpet. Humph! So maybe a happy ending is never really on the cards for Roszi and Arpi, her intended groom. We’ll have to see.

Besides the wedding, the big news of the day is that two Orthodox Jewish men, father and son perhaps, have landed at the town’s train station and they’re making their way slowly into town, walking behind the horse and cart that’s carrying their two big trunks.

The news of these two men, one old and bearded and the other young, dark and clean-shaven, has struck terror into the hearts of the townspeople, who are quickly made aware by the railway stationmaster that the two Jews are making their way into town slowly but steadily. Why should the villagers be this frightened?

Well, let me explain a bit of the back-story. Hungary was practically swept clean of its Jewish population by the Nazis in World War Two. I think about 400,000 Hungarian Jews were deported to ‘camps in the East’ which, of course, was merely Nazi-speak for concentration camps in Germany or Poland, many of which were not only places of detention but death camps as well.

And what happened to the houses, businesses, furniture, clothing, even the domestic pets and children’s toys that they had to leave behind? Often, they had very little advance warning that they were going to be getting on the deportation trains, so the stuff they were forced to leave behind far outweighed the meagre possessions they were able to take with them.

Well anyway, in many cases their non-Jewish neighbours, the ones who were not deported by the Nazis because they weren’t Jewish, simply helped themselves to the vacant houses, apartments or businesses. In some cases they were able to procure documents to say that they’d acquired the properties legally but morally, they were no more entitled to them than you or me would be today.

In the film, half the village is terrified by the impending arrival of the two Jews because some of them- the villagers- are living comfortably in the Jews’ old houses, using their cookware and sitting around on their furniture.

The drugstore supposedly ‘owned’ by groom-to-be Arpi, son of the town clerk, is the property of one such ‘disappeared’ Jew, a family man by the name of Pollack, whose dusty old family photo album is still in the shop somewhere.

I’ll tell you this one thing I’ve picked up in my researches. If you didn’t much care for a particular Jewish person back then or if you took a liking to his fancy apartment or his thriving business, you could report him to the Nazis and, when the Nazis inevitably deported the Jewish person and often his whole entire family with him, it was very likely that you could get to keep his apartment or his business for yourself. Greed was a big factor in many of these ‘reportings.’

This is exactly what’s happened here in the case of the Pollack family. Half the village has seemingly put their names to a signed paper of accusation that saw the family being deported and maybe murdered as well.

Now they’re scared shitless- excuse my French again- that the two Jewish men who are walking towards the town are representatives or relatives of the Pollacks, come to see their rightful property returned to them. Their rightful property which the townspeople seem to have divvied up quite neatly between them…

Cracks are appearing in various relationships in the town as husband accuses wife and wife accuses husband of having been greedy enough to send the Pollacks to their death and take their property for themselves. Some people are actually rushing around madly hiding bits of crockery and shit. It’s disgusting to witness, such petty, petty thievery.

Some of the villagers are desperate to hold onto what they mistakenly tell themselves is ‘theirs’ now, whereas others, to give them their due, are crippled with the guilt of what they’ve done and they simply can’t live with themselves any longer.

In the meantime, the two silent, solemn-faced Jews are making their way steadily towards the town from the train station and the fact remains that the worried villagers don’t actually know for a fact what these two men want.

What will happen when they find out for sure? The ending is visually stunning and the film itself is well worth seeing. Just don’t expect any laughs, lol. I certainly didn’t expect any and I was more than satisfied.