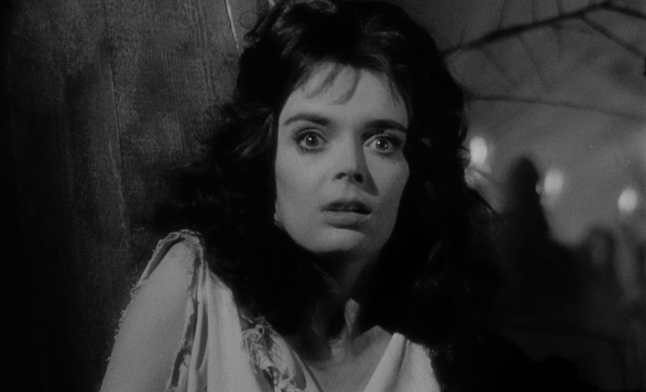 BLACK SUNDAY, aka THE MASK OF SATAN. (1960) DIRECTED BY MARIO BAVA. LOOSELY BASED ON THE SHORT STORY ‘VIY’ BY NIKOLAI GOGOL.

This Italian horror movie is the most magnificently gothic film you could ever watch. The scenery and settings are as eerily, dustily gothic as you could possibly wish for, and scream queen Barbara Steele is infinitely watchable as the two lead characters. (She plays a dual role here.) It made stars out of both Steele and Mario Bava, the Italian director.

Steele’s face and figure are exquisite, her hands beautiful, slender and expressive, but that face! The camera is right to focus on it for much of the movie. Close-up, she really is the most striking creature to ever draw breath. Surely no actress has ever played a gothic princess quite so perfectly.

Here, she does a brilliant job of portraying the poor doomed Princess Asa, sister of the ruler of Moldavia, a European kingdom in the seventeenth century, about 1630, to be exact. Her horrible brother, Prince Vajda, has condemned her and her manservant Javutich to death for supposedly being witches, vampires and cohorts of Satan (I accidentally typed ‘cohorts of Stan’ there by accident, which is much less menacing…!)

The first five minutes of the film show Asa’s agonising death. The scene is so controversial that the film was banned in England till 1968. It shocked the living daylights out of me when I saw it first, especially the bit with the enormous executioner-type guy wielding the heavy mallet…! Repeat viewings showed me clearly that the scene has lost none of its power to shock, just because sixty years have elapsed.

I won’t describe the death here; it’s just too gruesome. My sympathies are entirely with the poor persecuted Asa, who curses her brother and all his descendants, not just for three months (a joke from The Simpsons), but for all eternity.

Then the action moves to two hundred years later, in the same God-forsaken kingdom of Moldavia. Two doctors are on their way to a medical conference when their carriage breaks down outside the tomb of Princess Asa, the witch.

They are fascinated to see her face, still covered by the mask of Satan, and the older doctor, Choma Kruvajan, makes the mistake of allowing the blood from a cut on his hand to drip onto the witch’s face, an action which we just know will bring the vengeful witch back to life. Well, if it was good enough for Hammer’s Dracula…!

The handsome younger doctor, Andrej Gorobec, falls head-over-heels in love with Princess Katia of the House of Vajda, the descendant of Asa who also happens to be a dead ringer for the deceased witch.

Katia’s haunting beauty and the air of sadness that envelops her like a cloud of Chanel No.5 draw Andrej to her like a fly to an open jam pot. But is now a good time to be wooing a princess of the doomed House of Vajda, especially given that Asa and her servant Javutich are back and baying for blood…? On his own head be it, then…

The crypt and castle here are the best and most atmospheric I’ve ever seen in a gothic movie. The monochromatic black-and-white is eminently suitable to the fearful tone of the film. Dread and terror are in the air, and no-one is exempt, not Katia, not her brother Constantine and not her father Vajda or her new lover, Andrej. Beware the mask of Stan. There, you see? I’ve done it again. Beware the mask of Satan, I meant to say. It’s like the mask of Stan, only deadlier…