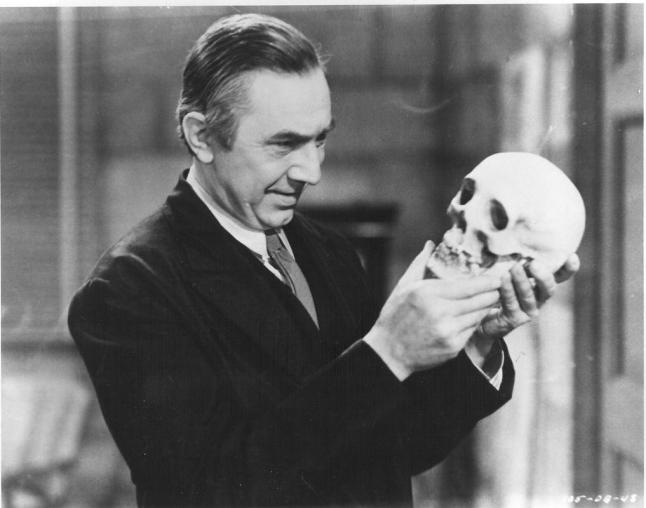 I’ve said it before and I’ll say it again. When he’s not playing his most famous role of Dracula, Bela Lugosi is at his absolute spine-tingling best when he’s playing a mad scientist or doctor who’s hell-bent on either getting revenge on the world for some real or imagined slight, or on gaining world domination just for the hell of it. Because he can, in other words, lol.

In THE DEVIL BAT, a genuine little gem from 1940, he plays Dr. Carruthers, a well-respected and well-loved scientist living in a small American village. The village’s biggest employer seems to be the Heath and Morton Cosmetics Company, for whom Dr. Carruthers also works, developing new formulae for successful perfumes, aftershave lotions and other lotions and creams that you slap on your skin so that you smell real nice like to the opposite sex.

In fact, it was Dr. Carruthers’s excellent work that’s made the Heath and Morton Cosmetics Company the multi-million-selling business it is today. Old Doc Carruthers has no shares in the company. All he got for his trouble was a lousy bonus cheque. The rage and resentment he’s been feeling against the two Heath and Morton families know no bounds.

He gives different male members of the two families his new patented aftershave to ‘try out,’ knowing full well that when he releases the hounds or, in this case, the killer bats, the mens’ lives aren’t worth tuppence any more. They’re toast, in other words. Dead men walking on the Green Mile, so to speak.

While the bodies pile up, an ace reporter by the name of Johnny Layton is called in to get a story for his paper about the murders. His sidekick, a photographer with the dubious nickname of ‘One Shot Maguire,’ provides the comic relief and Mary, the beautiful daughter of one of the families, the love interest for the dynamic newshound Layton.

Bela and his killer bats are the undisputed stars of the show, however. The gleeful grins on Dr. Carruthers’s face when he realises that his fiendish plans are working is just joyous to behold. Bela in general is just a sheer joy to watch.

His face definitely lends itself to an array of marvellously devious expressions. Just look at him cackling his ass off through the laboratory door at the sight of his super-bats becoming bigger and bigger and bigger. It’d warm the cockles of the coldest heart.

THE VAMPIRE BAT (1933) has pretty much everything you could possibly want in an old horror movie: a Burgomeister, a dark little village somewhere in Europe, worried townspeople, a concerned little town council, an angry mob, complete WITH torches, lol, and Lionel Atwill, Fay Wray, Melvyn Douglas and Dwight Frye as the stars. What else could you really ask for?

Certain selected villagers in the little hamlet of Kleinschloss (the little castle?) are being found dead in their beds of a dreadful blood loss. Drained of their precious life’s haemoglobin, all that’s left behind is a sack of skin and bones that’s truly horrible to behold.

The villagers, naturally, are up in arms about the murders and talk of vampires is rearing its ugly head no matter how superstitious and backwards it makes the villagers look. They don’t care a flying fig about how they appear, all they care about- quite rightly, too- is not being murdered in their beds by some unknown gruesome entity.

Screen villain Lionel Atwill (he plays Moriarty to Basil Rathbone’s Sherlock Holmes in SHERLOCK HOLMES AND THE SECRET WEAPON) here portrays Dr. von Niemann, the town’s one medic and well-respected scientist who’s as baffled about the murders as anyone else. And if you believe that, you’ll believe anything, lol.

Screen royalty Fay Wray, whom you might be more used to seeing in her scandalous scanties being carried up the Empire State Building by a big hairy ape (KING KONG, 1933) is Dr. von Niemann’s attractive young assistant, Ruth, whose scientific knowledge you could probably write on the back of a stamp, but she shore is mighty purdy…!

Melvyn Douglas (James Whale’s THE OLD DARK HOUSE, 1932) plays Fay Wray’s boyfriend and the detective assigned to the murders. He has a logical scientific approach to the hideous blood-lettings and he thinks that all this talk of vampires is a load of superstitious old twaddle and old wives’ tales, more suited to the Dark Ages than these modern times. Will he have cause to eat his words? Place your bets, ladies and gentlemen, place your bets…

The star of the show here is Dwight Frye, best known for playing Renfield in the Bela Lugosi DRACULA (1931) and Dr. Frankenstein’s humpbacked servant Igor in James Whale’s FRANKENSTEIN (1931). Like Bela with his mad scientists, Dwight Frye seems to have been typecast as insane loners and outcasts, but he does it so wonderfully!

Here, as Herman Gleib, the local misfit and pariah who’s not the full shilling- an Irishism for someone who’s not playing with a full deck- he cackles just like Renfield and scares the horrified locals, amongst whom he’s totally persona non grata.

His penchant for befriending bats and acting weird and secretive in general causes him to be blamed for the murders by the locals. He’s just a handy and natural scapegoat. Poor Herman, with his manic grins and his criminally bad haircut. He just can’t catch a break. There’ll be tears before bedtime. You mark my words…