Her new book, THIRTEEN STOPS EARLIER, is out now from Poolbeg Books: 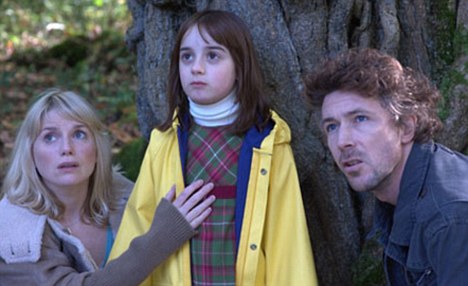 Eeeeeeh by gum, this ain’t half a proper little belter of a horror movie. It’s Oirish like meself, to begin with, with loads of the fabulous Oirish scenery, woods, rivers, trees and streams we have on offer here and, no, I don’t work for the bleedin’ Tourist Board, lol.

Can’t stand bloody tourists, me. Sure, they bring millions of foreign dollars, euros and pounds into our economy but every time you try to cross the feckin’ street there’s about a hundred of ’em standing there en masse in a big unmovable block, obscuring your bloody path.

Anyway, to get back to WAKE WOOD (partially shot in Sweden), it’s also a Hammer movie, from the British film production company that, in the ’50s, ’60s and ’70s, brought us such films as DRACULA, THE MUMMY, THE CURSE OF FRANKENSTEIN, THE VAMPIRE LOVERS, LUST FOR A VAMPIRE and FEAR IN THE NIGHT.

Famous for using such magnificent actors as Christopher Lee and Peter Cushing, their actresses were women so busty and beautiful that the term ‘Hammer Glamour’ was coined to describe them. WAKE WOOD sees the return of Hammer, as it were, and it’s a film they needn’t be ashamed of. Let’s have a squint at the plot, shall we, and see what we think?

Patrick and Louise Daley are an attractive young couple in their thirties who relocate to a remote Irish village called Wake Wood after the death of their daughter, Alice.

It’s a horrible death, too, as the child is mauled to death by a vicious dog. Patrick, a veterinarian, and Louise, a pharmacist, become estranged from each other after the death, which often happens after a couple lose a child.

What the young grieving couple don’t realise, however, is that Wake Wood is the exact right place to be in if you’ve suffered a bereavement and you want to see your lost loved one again.

Louise in particular is desperate to get her precious daughter back. Even though fathers suffer too- people often forget that fact- the mother’s grief is often the most vocal, the most obvious, because she’s carried this child inside her for nine months and given birth to it in a nightmare of blood, pain and whalesong.

In fact, the weird, clannish and mysterious villagers (they’d put you in mind of the community of Summerisle in the 1973 film THE WICKER MAN), led by the marvellous Timothy Spall as Arthur, have a way of bringing the dead back to life.

It involves a long and complicated pagan ritual that sees a ‘re-birthing’ of the dead person through the nice fresh cadaver of a recently deceased person. ‘Re-birthing’ is a very WICKER MAN idea. The mad inhabitants of Summerisle would be well on board with such an idea.

Timothy Spall as the ‘I see all and hear all’ Arthur offers Patrick and Louise the chance to see their adored daughter Alice again. Alice alive again, to be specific. There are conditions attached, however.

The couple, if they go through with the ritual, must promise to stay in Wake Wood forever and ever and ever, no matter what. Keep the secret in the village, that kind of thing. Fair enough. Patrick, in order to please Louise and keep her with him, would agree to putting on a dress and a flowery hat and calling himself Roxanne if it would only bring Alice back.

Next, Alice will only ‘return’ for three days. The couple will get the chance to say their goodbyes properly this time and make peace with their child’s passing. I say that this mad idea of ‘returning’ will only bring misery and unhappiness to Louise and Patrick. They’ll be losing Alice all over again when the allotted three days are up. How will they bear it?

There’s one final proviso. The ritual will only work correctly if the person to be brought back has been dead less than a year. How long has Alice been in the ground, Patrick and Louise, Arthur asks the couple in all seriousness.

Oh, much less than a year, Arthur, don’t you worry about that, only about eleven months, the couple carol in unison, while looking at each other with the shifty eyes of people who are telling big fat porkies.

If they’re telling the truth, the whole truth and nothing but the truth, well, grand. Alice will come back for the three days just like Arthur promised. If they’re lying, well, Alice might still come back, but there’ll be something very, very wrong with her. On their own heads be it, I say…

The scene where Patrick and Louise are breaking into their daughter’s coffin in the graveyard, in the dead of night in the middle of a rainstorm, is super-atmospheric. You’ll be reminded of Stephen King’s PET SEMATARY and of an anguished Heathcliff digging up a long-dead Cathy. I also think of DON’T LOOK NOW, in which a couple who’ve lost a child are tormented by what they think are visions of her in her little red raincoat.

I’m reminded too of that old story which I think is called ‘THE MONKEY’S PAW.’ An elderly couple who’ve lost their son in a terrible disfiguring accident are granted their wish to have their beloved boy back with them again. But the thing that has returned from the dead to bang so heavily and ominously on their door one dark stormy night is not the son they remember so fondly…

The whole film- WAKE WOOD, that is- is wonderfully creepy and atmospheric. And it poses the question, should you raise the dead or leave them in peace? Some folks would give their own lives to see a deceased loved one just one more time.

They have things they still want to say, like ‘I love you’ or ‘I’m sorry.’ They might want to ask where the fuck the telly remote is, missing since before the funeral, stuff like that. Or the keys to the bloody shed. They might want to hug the person one more time, or punch them in the face if it was a husband, say, who cheated and you only found out after he’d croaked. But does all this just make the second parting a million times harder to bear?

Personally, I would think that the second parting would be even worse than the first. Plus, you’re messing with things that are better left alone. It’s never a good idea for us mere mortals to play God. Please do bear that in mind, won’t you, if you go down to the woods today…