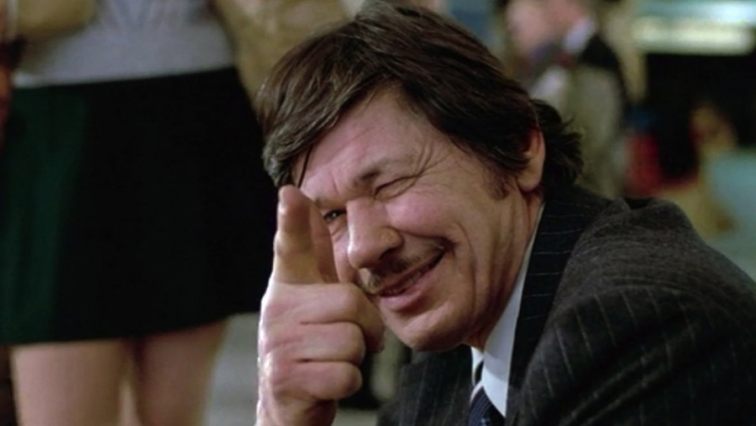 Big-shot company engineer-architect Paul Kersey is a very unlucky man. Every time he steps outta his New York/Manhattan apartment, he gets mugged by some jive-talking ‘Seventies cats with the Afros and everything who say things like, give us the money, honey and who think they’re cool just ’cause they’ve got flick-knives. Let me tell you cool cats, any asshole can carry a flick-knife. It doesn’t make you remotely special. Think about it.

Anyway, let’s start at the beginning of this, one of Charles Bronson’s biggest ever films, to which I believe there were many sequels made. He plays a family man, the above-mentioned Paul Kersey who, at the start of the film, is enjoying a sexy beach holiday with the wife he still loves, Joanna, even though they’ve been married for years and years and years. It’s sweet that they’re still hot for each other after all this time and still enjoy some nice cosy old-people sex.

They have a nice big apartment thanks to Paul’s nice comfortable well-paid job and a grown-up married daughter called Carol whom they both adore. One fateful day, when Paul is at work and Carol’s husband Jack is presumably at work also in his own place of business, something terrible happens to Joanna and Carol.

They are followed home from the grocery store by three scumbags, a trio of disgusting anti-social losers who gain access to the Kersey family apartment by pretending to be the grocery delivery boy. In a truly horrific home invasion scene, they rape Carol and beat her mother to death in front of her eyes.

Carol never recovers from the shock and ends up being put in a sanatorium by her devastated husband and heartbroken father. Here, catatonic, drugged up to the eyeballs and no longer able to talk, she may well spend the rest of her days.

Jeff Goldblum (THE FLY, JURASSIC PARK, FRIENDS) in his debut film role plays one of the assailants. He has this brilliant, jerky manic quality about him, as if he’s just downed a bucket of amphetamines chased down by a gallon of Coca-Cola and Skittles in order to calm his ADHD or something. He’s all jittery, tense, edgy, nervy.

Already he’s memorable, someone you’d recognise anywhere and whom you know has the capability to one day be good, really good. Although, of course, one wonders what esteemed scientist Ian Malcolm would make of these highly dubious anti-social shenanigans, breaking and entering and referring to one’s John Thomas as a ‘paintbrush,’ as in, ‘I’m gonna paint her mouth...!’ Oh yes, jolly good show, lads, do please carry on.

The effect of the rape-murder on Paul Kersey is what matters here. He’s not a violent man to begin with. In fact, he’s referred to as a ‘bleeding heart liberal’ and he hasn’t touched a gun since his hunter father was accidentally shot dead by another hunter after being mistaken for a deer. Also, Paul was a conscientious objector or ‘conchie’ during the Korean War. He’s still a really good shot though.

After being gifted with a lovely gun by a grateful business acquaintance, Paul takes to carrying the gun around with him on the darkened streets of night-time New York. He uses it to pepper any would-be muggers full of lead, and trust me when I say that a lot of folks are lining up to mug Paul, and they’re all carrying flick-knives. Gun beats knife. That much I do know.

The body count climbs ever higher as Paul start to really get into his role as a self-styled vigilante on the streets of New York. He starts to go out at night deliberately looking for lowlife criminals to shoot, instead of waiting until they just happen along by chance. He’s like a walking one-man protest against crime in New York, which was really bad in real life during this period.

The press pick up on his actions and soon the newspapers, magazines (yes, they still had them back then!) and TV news bulletins are all full of talk of ‘The Vigilante,’ as he now becomes officially known. You can’t just take the law into your own hands, though. That would set a very bad precedent and would be disastrous for the police force.

I love NYPD Lt. Frank Ochoa, the hard-bitten New York detective tasked with getting ‘The Vigilante’ off the streets. In fact, he’s so world-weary, worldly-wise and hard-bitten that he makes Columbo and Kojak look like two girly sissies on their way to ballet class via the ribbon store and the candy kiosk. He’s brilliant.

The higher-ups don’t even need to have this mysterious lone gunman put behind bars or otherwise brought to justice or anything. They just need him to stop doing what he’s doing ’cause he’s setting a very bad example to the public who, like the Hatpin Granny, are all now becoming ‘have-a-go heroes’ themselves in the style of their idol, ‘The Vigilante.’

The rape-and-murder scene is by far the most effective and memorable in the film. The rest of the film is mostly just Charles Bronson shooting at black people. Although I love the film, before I ever saw it I always assumed the premise of it would be to have Charles Bronson track down and kill his wife’s murderer and his daughter’s rapists.

This never seems to occur to him, however, even though they’ve got a fairly big clue in the form of the grocery store where the Kersey ladies did their shopping. He takes his revenge on crimmo lowlifes and society’s drop-outs in general, but not specifically on the perpetrators of the one act from which he’s suffered so badly and which has cost him so dearly. Strange, that. Ah well. Charles Bronson is well fit and handsome in this and he looks great holding a shooter, even an imaginary one. I’ll take that.

Here’s some random stuff about the film which you might or might not know. I bloody well knew I recognised a young Sonia Manzano, who played Maria in SESAME STREET for a whopping forty-four years, on the checkout till in the supermarket early on in the movie. Score one for me, lol.

I did not, however, recognise Olympia Dukakis as a cop at the precinct. Also, Denzel Washington swears blind that he did not make his film debut here as an alley mugger, and I don’t see any reason in the world for him to lie about it.

Finally, I am never, ever going to New York because of all the muggings and the high crime rate in general. I don’t care if it’s years later and things have changed, I’m still not going and you can’t make me.

I’ll stay here in good old Ireland where we don’t have that level of crime. Here we just have junkies who’ll jab you with a syringe-full of HIV-infected blood on 0’Connell Street unless you hand over your smartphone and wallet pronto. What’s that they say? It’s better the devil you know…? I should say it is an’ all.