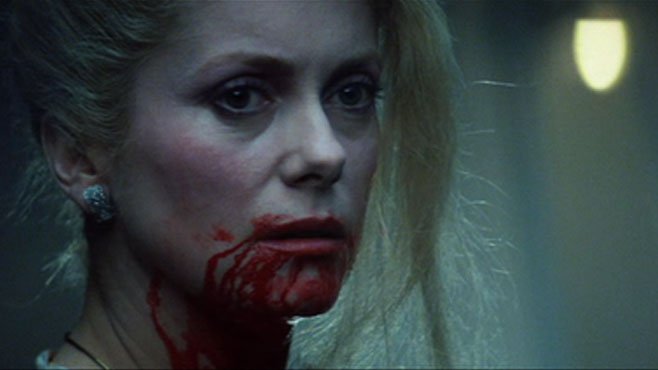 THE HUNGER. 1983. BASED ON THE BOOK ‘THE HUNGER’ BY WHITLEY STRIEBER. DIRECTED BY TONY SCOTT. CINEMATOGRAPHY BY STEPHEN GOLDBLATT.

I took this film out of the library recently (yes, there are still those of us who do that, like cave-people who’ve never heard of Netflix…!) and the librarian laughed as he checked it out and remarked that the director really had ‘a thing for billowing curtains.’

Despite its being obviously sexy and stylish, film critic Roger Ebert described the film as ‘an agonisingly bad vampire movie.’ That’s one way of looking at it, I suppose, but it’s found itself a cult following amongst the goth subculture so the news isn’t all bad.

Me personally, I love this film and think it’s one of the best non-Dracula vampire movies ever made, along with INTERVIEW WITH THE VAMPIRE and SALEM’S LOT, based on the internationally bestselling books by Anne Rice and Stephen King respectively.

Now to the plot. Miriam Blaylock, played by well-preserved French actress Catherine BELLE DE JOUR Deneuve, is one hot momma. In one way. In another, she’s a stone-cold bitch who also just so happens to be a vampire. That’s right, she’s an ageless and beautiful vampire who is hundreds, maybe thousands of years old.

She lives in Manhattan in a fantastic old house filled with the aforementioned priceless objets d’art. She doesn’t need to go out to work because she’s as rich as Croesus, although she poses as a teacher of classical music along with her handsome younger husband. By the way, did I forget to mention that this classy lassy with the bottomless bank account is married in the film to the Thin White Duke…?

Yep, her hubby John, an eighteenth-century cellist, is played by musician-actor David Bowie, who sadly passed away earlier this year and- as some people maintain!- unintentionally sparked off a chain of celebrity deaths that had us reeling and railing against the Grim Reaper till midsummer at least. It’s been a bad year for celebrity deaths.

He’s a vampire too like his missus but he’s a very tragic figure in this film. When we come in, he’s unfortunately started to age at the rate of knots, even though Miriam, that lying, manipulative bitch, had promised him eternal life and also eternal youth when they first got together back in the eighteenth century.

She may have been telling porkies about the eternal youth thing, but it seems that she was telling the brutal truth about his living forever, which is extremely bad news for her hubby John who’s now so ancient in his appearance that he makes Grampa Simpson from THE SIMPSONS look young…!

Before long, Miriam is callously locking him away in a coffin in a room at the top of the house where, incidentally, she keeps the rotting corpses of her other lovers. She’s pledged eternal love to all of them but we quickly learn that ‘eternity’ for Miriam can end in a heartbeat the minute she tires of you or you can no longer satisfy her. The corpses are doomed to lie there, awake and aware, for all eternity because she’s too goddamn selfish to let them die. That bitch. I told you guys she was cold…!

Things start to get really gruesome after poor, poor old David Bowie has been put in his ‘forever’ box in a heartbreaking scene that would make you feel very angry with Miriam on behalf of John and the other boxed lovers.

The sexually insatiable but horrifically selfish Miriam then turns her attentions to Dr. Sarah Roberts, the author of a dreary but terribly worthy tome called SLEEP AND LONGEVITY who carries out ageing experiments on monkeys, of all things.

Dr. Roberts, a gerontologist consulted by an agonised David Bowie before his incarceration in Miriam’s attic, is played by a freakishly young-looking Susan Sarandon with a painfully ‘Eighties hairstyle. Poor David Bowie thought that maybe she could slow down or even stop altogether his dreadful ageing process but it was no dice, sadly. Science hasn’t advanced that far yet, if it ever does.

Sarah can’t help being mesmerised by Miriam, who is quite simply the last word in feminine allure. The two have lesbian sex in Miriam’s gaff. (Well, what other kind could they have…?) Yes, you do see boobs; Sarah’s, but not Miriam’s…!

The sex is all very artistically-shot and stylish, and by the end of it, Miriam has co-mingled their respective bloods, in a disgustingly non-consensual act of what we’d today probably refer to as rape, and Sarah is on her way to becoming a fully-fledged vampire.

Sarah gets as sick as a dog as her body comes to terms with its new situation. I love the scene in which Miriam tells her new lover that she’ll sleep for six hours out of every twenty-four and she’ll need to ‘feed’ once a week. Just give the girl the instructive pamphlets entitled SO YOU’RE A VAMPIRE NOW or VAMPIRES 101 or VAMPIRES FOR DUMMIES or even SO YOU’VE RUINED YOUR LIFE and let her figure it all out for herself, lol.

Sarah becomes so desperate for blood when ‘the hunger,’ as Miriam puts it, is upon her, that she kills her own scientist lover when he comes looking for her at Miriam’s place, and she joins in the gory fun when Miriam rips a young male pick-up limb from limb.

Sarah’s scientist friends are alarmed when they examine her blood medically and discover that her bloodstream has actually been invaded by a foreign, non-human blood strain, which is winning the battle for dominance over Sarah’s own normal blood.

It’s extremely frightening for Sarah (‘What have you done to me…?’), and it’s also almost impossible not to think of the way in which the AIDS virus is transmitted. This was, after all, the time when AIDS was rearing its ugly head for the first time. The passing of the vampire gene resembles the transmission of a blood infection. Christopher Lee never had this issue, lol.

In fact, when I first used to watch the devastatingly handsome and sexually dominant Christopher Lee as Dracula in the HAMMER HORROR films, I wanted nothing more than to be a vampire too.

I’d live with him in his crumbling Transylvanian castle and drink blood from a jewel-encrusted goblet brought to me nightly by my new husband’s naked, full-bosomed handmaidens. It was going to be sweet. This film put me off the idea of being a vampire for good.

All that sweating and being sick and looking as if you’re dying with the ‘flu while your body craves human blood changed my mind about it, along with the decidedly unsavoury sight of Susan Sarandon in her yucky grey sweat-socks sweating buckets through her old grey T-shirt.

I only ever wanted the glamour and the sex with Dracula, anyway, not so much the other stuff. I certainly never wanted to do my own killing, and I’d only ever be pushed about immortality if I had someone decent to share it with. But, when it comes down to it, isn’t that what Miriam wants for herself…?

So anyway, do Miriam and Sarah live happily ever after for all eternity, or is eternity just too long a time even for a vampire…? There’s a neat little twist at the end that I can’t tell you about, but I thought it was a strange ending to an already strange film. Apparently, some members of the cast were disappointed in the ending but some viewers will think it’s only right and proper.

There are some plotholes in the film, which is so painfully ‘Eighties it looks a bit dated now, but the plotholes, I suppose, are of secondary importance compared to the look of the thing. Willem Dafoe makes a brief cameo as a man who wants to use the pay-phone after Susan Sarandon’s finished with it and the violin-playing kid is really, really annoying. ‘Eighties band BAUHAUS make an appearance and the monkey experiments stuff gets quite confusing after a while. I didn’t enjoy that bit too much.

The first half-hour drags a bit and things don’t really get going until David Bowie is locked away in his coffin, but the hour or so after that is required viewing for fans of the vampire genre. Based on the novel by Whitley Strieber, there’s not one mention of the ‘v’ word in the film, however, which is interesting. Watch this if you enjoy vampire flicks. If you can overlook the flaws, it’s a real little cracker, I promise you.