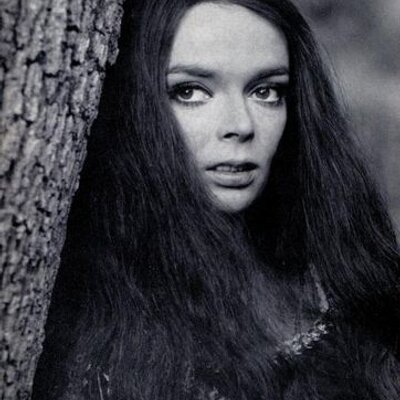 Set in Scotland in 1910, this is an absolutely gorgeous Italian gothic horror film, made in colour and starring that most divine of all scream queens, Barbara Steele. If ever a woman was born to wear period costume and the unrelieved black and jet of widow’s weeds in the setting of a fabulous old gothic mansion, it is surely Ms. Steele. With her dark hair, those huge dark flashing eyes with extra-white whites and her pouty pink lips, she is a horror goddess of some considerable distinction.

Here, she plays Margaret Hichcock, the beautiful and much younger wife of eccentric millionaire physician-scientist and occultist, John Hichcock. John is a cripple and confined to a wheelchair. Margaret seems outwardly devoted, loving and attentive to her unfortunate spouse, who lavishes her with jewels and furs and fantastic dresses, with his magnificent mansion in which to store everything.

One is reminded of the words of spoof chat-show hostess Mrs. Merton (Caroline Aherne from The Royle Family) to her guest on the couch, magician’s assistant Debbie McGee: ‘What first attracted you to the millionaire Paul Daniels…?’ Get what she’s implying? Of course you do. Snigger.

John Hichcock has a tendency to feel extremely sorry for himself, despite his millions of pounds, his wonderful seaside mansion and his stunning younger wife. Well, I suppose he doesn’t feel very virile and manly next to his doctor, the younger Charles Livingstone, who is both, and staying in John’s house to boot, so as to be on hand for his patient. Oh, didn’t I mention that poor, crippled John has a love rival in the form of this handsome and bearded medic…? Well, he does, lol.

Unbeknownst to John (though he surely must suspect something), Margaret and Charles are having the kind of deeply passionate sexual love affair that a man in a wheelchair can probably only dream about. Their coupling is urgent and satisfying, but it goes much farther than this.

Margaret, head over heels in love with the attractive, rascally doctor, wants him to prove his love to her by performing the ultimate act of devotion: killing John, so that she and Charles can be together forever, whilst enjoying the material fruits of John’s labour together as well. The dastardly pair can almost taste that lovely money…

It never works out well though, does it? You’ve only got to watch films like Double Indemnity, later re-made as Body Heat, and The Postman Always Rings Twice, Dial M For Murder, A Kiss Before Dying and A Perfect Murder, to know what happens to young lovers who try to kill the wealthy spouse of one or other of them.

Even if they do manage to get the job done and the hated spouse, who’s standing in the way of their perfect happiness, is successfully bumped off, the terror of getting caught almost always leads the guilty parties to begin destroying each other with suspicions, paranoia and fear.

Riddled with guilt and maybe even regrets, they’ll often behave so nervously and carelessly that they give themselves away to the Poirot, Maigret or Morse waiting patiently to catch them and who, quite frankly, has suspected them from the start and was only giving them enough rope with which to hang themselves.

Still, as if any of this would ever prevent a pair of lovers from committing murder if they thought they could get away with it! Charles does the devilish deed, but almost from the moment he does it, Margaret and Charles both are plagued by John’s ghost, which is presenting itself inopportunely around the house in ever more ghoulish manifestations.

Are their guilty minds causing these manifestations? I mean, are they hallucinating or is there something more sinister at work here? Is one of them trying to gaslight the other? It’s happened before in situations like this. And corpses have frequently turned up acting the mickey after death in other movies as well, films like Crucible of Horror, starring Michael Gough, and Hammer’s Taste of Fear with Christopher Lee.

John’s safe has been emptied as well, to make things a million times worse, and Charles and Margaret are doing their utmost to try to recover the wealth, without which they’ll have killed John for nothing. Where is the money, and who or what is trying to drive them mad? Who will triumph, Charles or Margaret or, as is infinitely more likely, neither? Remember that we’re not usually intended to profit from our murder of another…

Barbara Steele’s strikingly beautiful and expressive facial features are the undoubted star of this show. There’s some gorgeous scenery too though, like the graveyard in which stands the Hichcock family crypt, where some deliciously atmospheric scenes of gothic horror are set.

Watch out for the reference to Alfred Hitchcock’s Psycho, which had already been made, and the little similarity to The Changeling, the George C. Scott horror movie which by this stage had not yet been filmed.

The characters of John’s old governess Catherine and the local cleric Canon Owens, a wittering little man who knows full well on which side his bread is buttered, are excellent additions to the little cast of five. The scenes of possession are genuinely creepy. But Ms. Steele’s unusual beauty still comes out on top every time. God save the (scream) queen…!