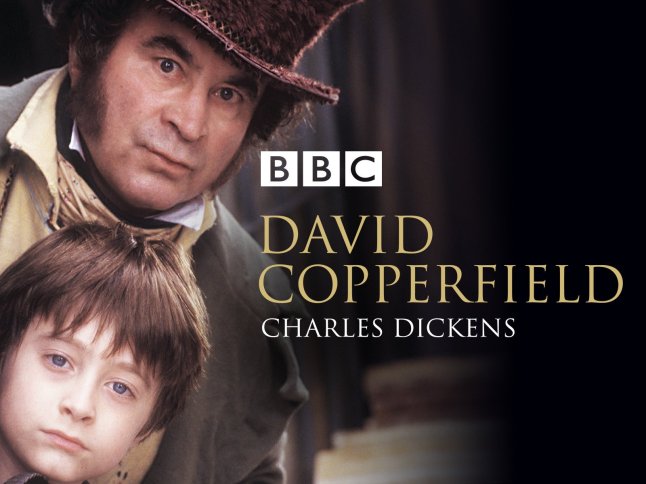 DAVID COPPERFIELD. (1999) A BBC PRODUCTION: BASED ON THE BOOK BY CHARLES DICKENS. DIRECTED BY SIMON CURTIS. TOM WILKINSON AS THE NARRATOR.

‘Like many fond parents, I have in my heart a favourite child. And his name is David Copperfield.’ Charles Dickens.

David Copperfield the book is a mammoth achievement on the part of its writer Charles Dickens. Nearly a thousand pages long, it details the life of the titular David Copperfield from his baby days to much, much later on in his life, and in such detail it would truly take your breath away. I’ve been reading the book myself this year and was delighted to find this film version of it, which was first broadcast on the BBC in 1999, on Christmas Day and Boxing Day.

Everyone loves a bit of Dickens at Christmas, whether it’s his perennial festive favourite A Christmas Carol, or Great Expectations, Bleak House, Nicholas Nickleby or any of his other works.

His books are immensely popular when it comes to screen adaptations, the way Shakespeare’s works lend themselves so readily to staging in the theatre. It’s fantastic the way we’re still familiar with Dickens and his oeuvres nearly a century and a half after his death.

In this version, a pre-Harry Potter Daniel Radcliffe in his first screen role plays David as a child. His childhood at the Blunderstone Rookery in Suffolk is idyllic, spent with his adoring mother Clara Copperfield and even more adoring nurse Clara Peggotty, played by Birds Of A Feather star Pauline Quirke, who’s perfect in the role.

His blissful existence changes when David returns from a visit to Yarmouth, where he has been staying at the shore with Peggotty’s kindly seafaring brother Daniel (Alun Armstrong: This Is Personal: The Hunt For The Yorkshire Ripper), Daniel’s nephew Ham, Daniel’s niece Little Em’ly (who is not Ham’s sister) and a weeping widow by the name of Mrs. Gummidge, played by Patsy Byrne, the actress who portrayed Miranda Richardson’s dotty old Nursie in comedy series Blackadder.

David returns to Blunderstone Rookery, from the happiest holiday of his whole life, to find that his lovely sweet mother has married her horrible suitor, the grim, black-clothed, stern-faced and joyless Mr. Murdstone, played by an unrecognisable Trevor Eve (Shoestring, the Frank Langella Dracula.)

Mr. Murdstone brings his equally horrible sister Jane, played by Zoe Wanamaker, to live with them, and between them they pretty well terrorise both mother and son. Their only ally is now the wonderful Clara Peggotty, who would die for either of her precious charges in a heartbeat.

After an altercation in which David is savagely whipped by Mr. Murdstone, his nasty step-father sends him away to boarding school against his mother’s wishes. But it was very much what happened to the sons of well-to-do men in the Victorian era. The boys and their mothers had little or no choice in the matter.

At school, the boys were whipped by their teachers and by older boys (for whom they were forced to ‘fag’ or skivvy), made to learn a load of dry, dusty old Latin, algebra, theorems and trigonometry while deprived of most material comforts, and then they left school damaged, broken, determined to take their revenge on the world and with the most intense sexual hang-ups about being flogged that would never leave them. Okay, so I’m making a generalisation here but you get the idea.

David’s head-teacher, the sadistic old Creakle, played by Ian McKellen, is practically addicted to whipping the boys in his rather dubious ‘care.’ David’s only friend and protector is, rather luckily, the arrogant young toff Steerforth, without whose patronage David would undoubtedly have suffered much more in his schooldays.

When David’s bullied and broken young mother dies, not long after giving birth to Mr. Murdstone’s child, Murdstone removes a heartbroken David from school (heartbroken about his mum, not about leaving school!), begrudging the money that would be required to pay for the boy’s education.

He then forces him to work in a London blacking factory of which he is part-owner. It’s no more than slave labour and David is bullied there by the older boys. I’m not sure what a blacking factory is but it seems to involve a great many icky barrels of boiling hot tar. Not exactly the place for a vulnerable child.

David is happy to lodge with Mr. Wilkins Micawber (genially played by Bob Hoskins), however, one of Dickens’s most enduring characters. Married (his wife is played by Imelda Staunton) with several children, Mr. Micawber is constantly in debt, constantly hiding from his many creditors, constantly having to pawn everything in the house in order to have money for food and constantly living in the optimistic expectation that something positive will ‘turn up’ to save his family from starvation and his family name from a perpetual blackening.

The main thing you need to remember about Mr. Micawber is that you should, under no circumstances whatsoever, ever lend him money. It will undoubtedly be the last you see of it. He’s free with his IOUs all right, but unfortunately you can’t eat those.

While lodging with Mr. Micawber, David has the experience of visiting his friend in Debtor’s Prison and of becoming intimately acquainted with the local pawnbroker, played by comedian Paul Whitehouse. When the Micawbers move away, on the promise of something’s unexpectedly having ‘turned up,’ David decides he’s had enough of the factory.

He runs away to Dover, to the one relative he has left in the world, his wildly eccentric Aunt Betsey Trotwood, played by Maggie Smith. David is as happy as Larry living with his Aunt Betsey and her no less eccentric but kindly and well-meaning lodger, Mr. Dick, played by Ian McNeice.

Aunt Betsey goes to bat for him against the odious Murdstones and, even when she does send him to school, it’s to a nice decent school in Canterbury. While there, he lodges with Aunt Betsey’s cordial lawyer Mr. Wickfield and his beautiful daughter Agnes, who treats David like a brother and becomes a lifelong friend. David has fallen on his feet here, lol.

The star of the whole show is Nicholas Only Fools And Horses Lyndhurst as the startlingly red-haired and sinister clerk of Mr. Wickfield’s, Uriah Heep. Being ‘umble’ is Uriah’s thing. Falsely ‘umble, that is, pretending he’s content to stay a lowly clerk when his ambition secretly knows no bounds. He’s the kind of poisonous wretch, however, who prefers to get ahead by bringing others down and trampling on their broken bodies on his way up the ladder to take their place.

He has his evil eye on Mr. Wickfield’s business and, even more disturbingly, on Mr. Wickfield’s lovely daughter Agnes, and he loathes David from the start, seeing him as a competitor for both ‘commodities.’ He tries to hide his hatred for David under a simmering veil of ‘umbleness,’ but I think both men know the real score. Can David prevent Uriah from doing the ultimate damage to his dearest friends…?

There’s so much more to the story. He meets the love of his life, Dora, and he entertains ambitions himself of becoming a writer, even though his grounding is in the law. My favourite storyline in the whole book/film is what happens to Little Em’ly and the poor devastated Peggotty family when David unwittingly releases a viper into their collective bosom.

And, as the cast list reads like a Harry Potter ‘pre-union,’ may I suggest that, as brilliant as Trevor Eve is in the role of Mr. Murdstone, a black-haired and hatchet-faced Alan Severus Snape Rickman might have been even better?

Michael Boone Elphick plays Peggoty’s suitor Barkis, and Cherie Lunghi is cast in the role of Steerforth’s autocratic mother. Thelma Barlow, who for years played the fluttery Mavis Wilton, Rita Fairclough’s sidekick, in Coronation Street, here portrays Uriah Heep’s mother (‘Be ‘umble, Uriah, be ‘umble!’). Comedienne Dawn French is the tipsy Mrs. Crupp, David’s landlady when he first lives independently. As adaptations go, this is an excellent one, and with an all-star cast to boot. It’s well worth three hours of your time. I say go for it…!